Backpacking on the Lofoten Islands

Norway has been number one on my "places to visit" list for quite a while now, and doubly so Lofoten, an archipelago of islands stretching out into the North Sea, 170 km within the Arctic circle. The region is characterised by steep-sided mountains rising dramatically out of the sea and a myriad of fjords and lakes twisting their way through the wild landscape, beholding a combination of drama and beauty that is arguably unparalleled anywhere else in the world. I knew this just looking at photographs of the place, and so I couldn't wait to experience it first hand. 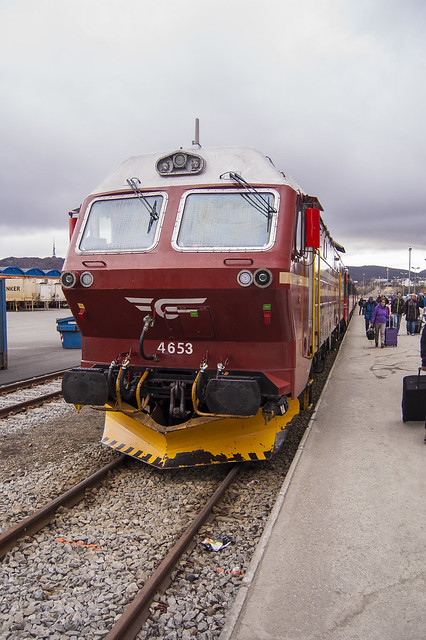 Ever the connoisseurs of cheap transport, we'd figured out that a Ryanair flight to Oslo and then a 24-hour train journey from Oslo to Bodø would get us in touching distance of the islands for a little over £100 each (return). Another 187 NOK (around £15) would get us a ferry ticket from Bodø on the mainland to Moskenes, at the western-most tip of the islands, and we knew that the Norwegian Allemannsretten - "every man's rights", equivalent to our Open Access - meant that accommodation costs could be kept to a bare minimum by wild camping. As such, it dawned on us that our main reason for not visiting Norway - the cost - wasn't a reason at all, and with haste we booked our flights and waited tentatively for the cheap Minipris train tickets to be released.

Catching the ferry to Moskenes, on the island of Moskenesøya, brought us right into the heart of some of the islands' most dramatic scenery. After a night at the campsite in Moskenes, we caught another smaller boat from Reine (just up the road from Moskenes) to the small, barely-inhabited settlement of Kjerkfjorden, to begin a few days backpacking from there to Ramberg on Flakstadøya, the next island along in the chain of islands that comprise Lofoten.

Our first stop was the remote beach of Horseid, located a few kilometres north over a col from Kjerkfjorden. The morning's cloud cover had begun to break up and by the time we arrived at the beach itself to pitch our tent, the sun was out in full force. Despite being far within the Arctic circle, Lofoten gets hit by the gulf stream and as such has much milder winters than one would expect at 68 degrees north. But still, the air temperature didn't let us forget how far north we were, and whilst Britain was basking in balmy double figures, Lofoten was hovering around 5 degrees Celsius. Looking around at the snow-capped peaks lining the beach reminded us that spring was only just arriving and we were glad of our winter-weight down jackets.

Not a bad camping spot at Horseid Beach 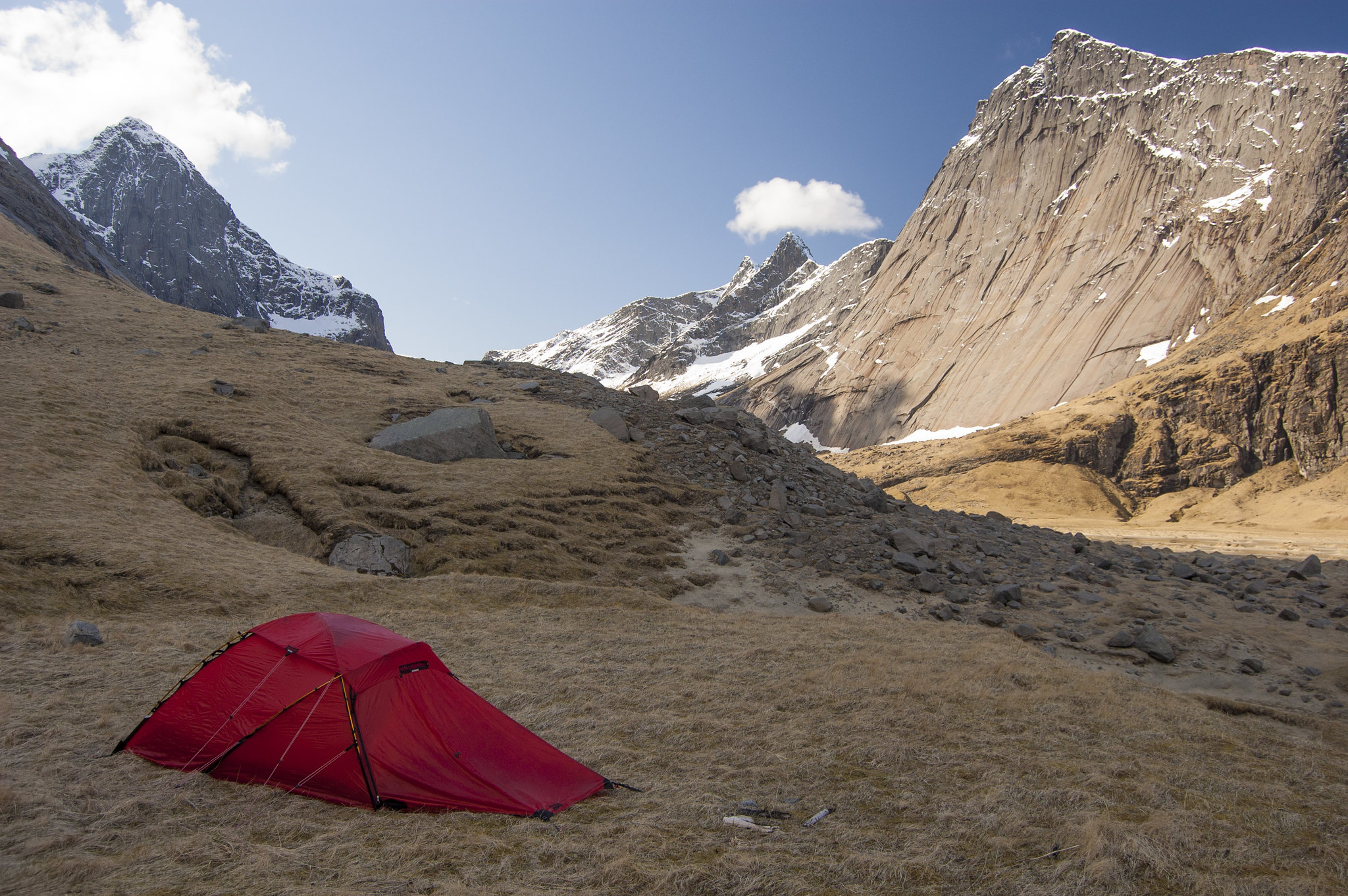 The following morning, sun still in full force, we packed up and headed east-wards, through the col between Markan and Kråkhammertinden and climbing steeply to gain Markan's eastern ridge. Soft unstable snow and large cornices made this an airy place to be, and care was needed in reaching the summit to enjoy stunning views to the east and over Kråkhammertinden. The sun's heat was rapidly stripping snow from the steep granite crags of the surrounding mountains, and the sound of worryingly frequent avalanches reminded us that careful route choice through this serious and complex terrain was needed.

We had a bit of an "epic" getting to our spot for that evening, Kvalvika Beach, thanks to snow-covered ankle-twisting boulder fields on the descent of Markan, and making a slight (unintentional) detour resulting in hacking through shrubbery for the best part of an hour. The reward - two evenings enjoying the stunning surrounds of one of Lofoten's most popular beaches - more than made up for it.

The summit of Ryten is an easy walk from the beach and the following day we had a leisurely stroll up it to enjoy some sensationally-exposed butterflies-in-stomach views back to where we were camping. 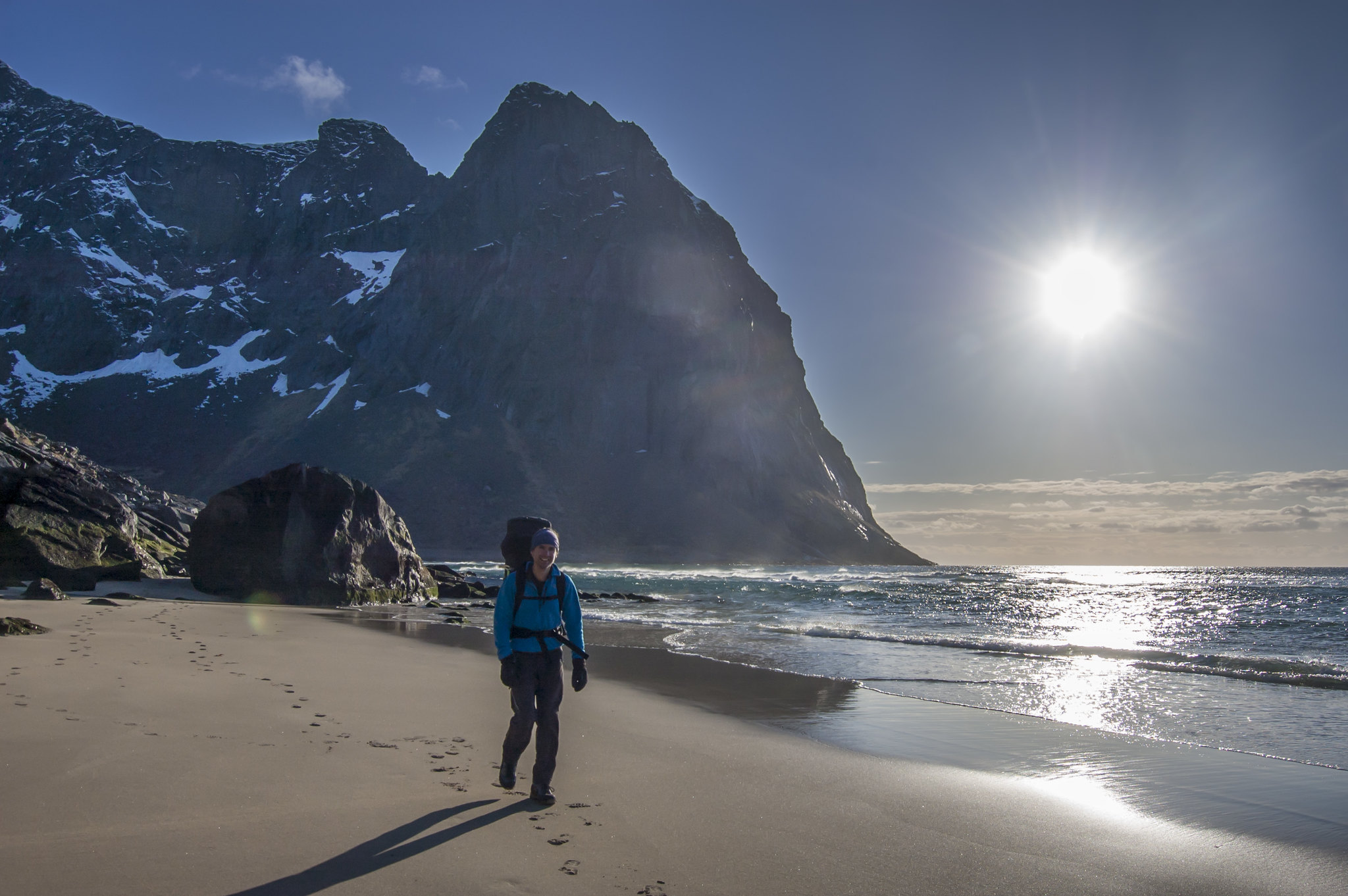 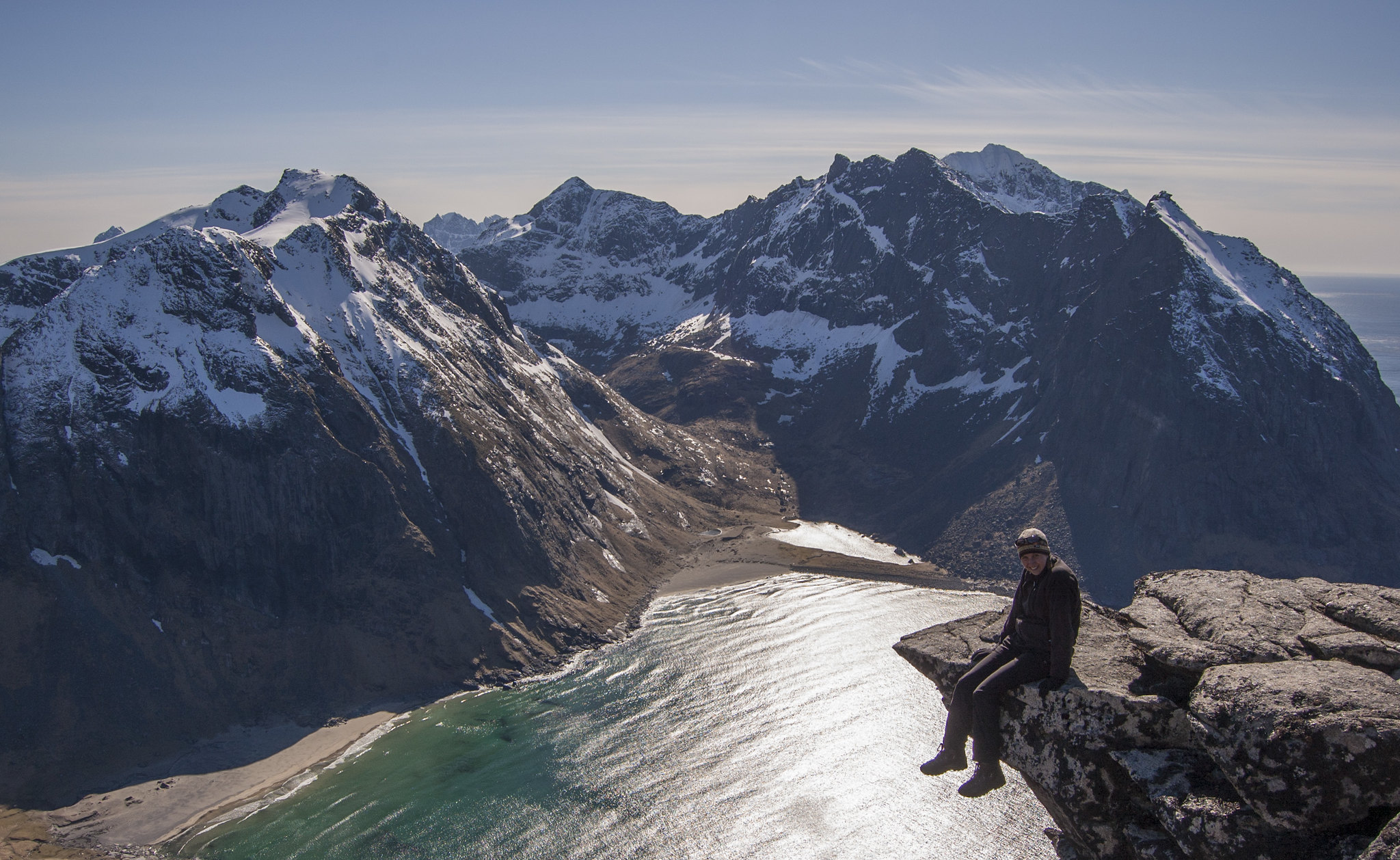 We'd been more than lucky with the weather up until this point and so it was only fair that Wednesday and Thursday should bring low cloud and rain. The HI hostel in Stamsund had come highly recommended and we were keen to check it out anyway, and so the bad weather gave us the perfect excuse to catch the bus east from Ramberg (after a not-so-pleasant 10km walk along the road) to Stamsund, via one of the larger towns on the islands, Leknes.

The hostel is perched perfectly in Stamsund's little picturesque bay, consisting of two old fisherman's cabins uniquely decorated with warmth and welcome-ness, and complete with eccentric host Roar (who even has his own unofficial fan page on Facebook!). Safe-to-say, it lived up to its recommendations, and at 160 NOK a night for a bed, who can complain?! Norway isn't normally known for it's cheap accommodation. 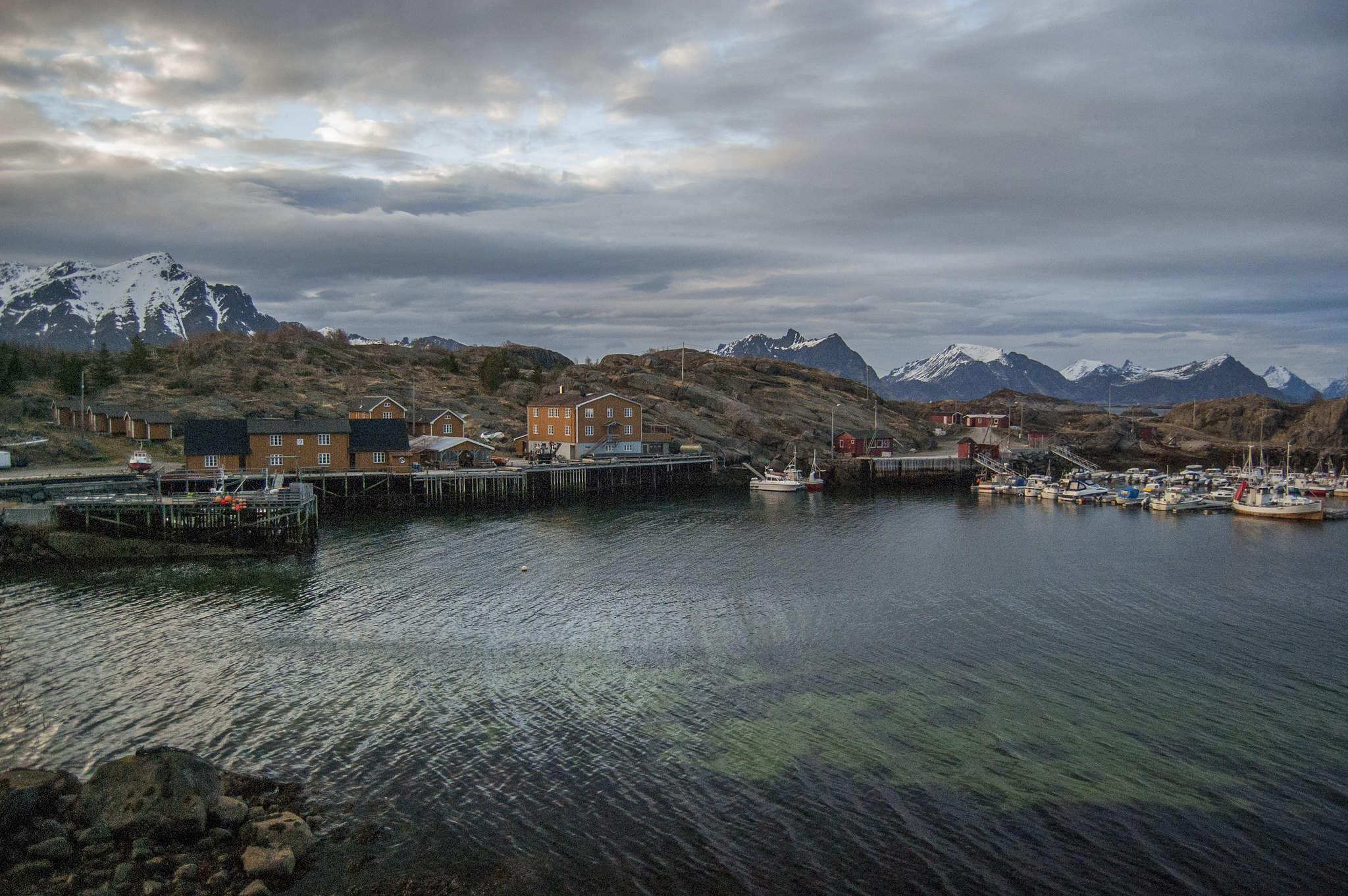 The HI hostel at Stamsund

Suitably refreshed after our little bit of mid-holiday luxury (a big motivation in going to the hostel was a get a much-needed shower!), we caught the bus back to Reine and then the same little boat as earlier in the week, this time alighting at Vinstad to walk the few kilometres to Bunes Beach. Rain was still on the forecast, but fortunately it mostly held off until we'd pitched our tent and cooked tea.

We had two nights planned at Bunes Beach and so after a leisurely start - waiting for clouds lingering around from the day before to disperse - we set off to explore Helvetestinden. The mountain sits directly to the east of the beach and it's western face comprises an enormous granite wall rising up from the beach all the way to the summit, at a little over 600m. There are a number of climbing routes up this seemingly blank wall, but fortunately for those of not blessed with ape-like climbing ability, a walker friendly route climbs its easier-angled southern ridge. We discovered that this route still offers a good deal of excitement, with stupendous exposure down to Kjerkfjorden to the east and a few rocky steps of around British scrambling grade I. Its location is without comparison and the panoramic views from the summit are, for want of a better description, breathtaking. The weather was better that evening and we got to enjoy the sun setting over the Norwegian Sea once more. 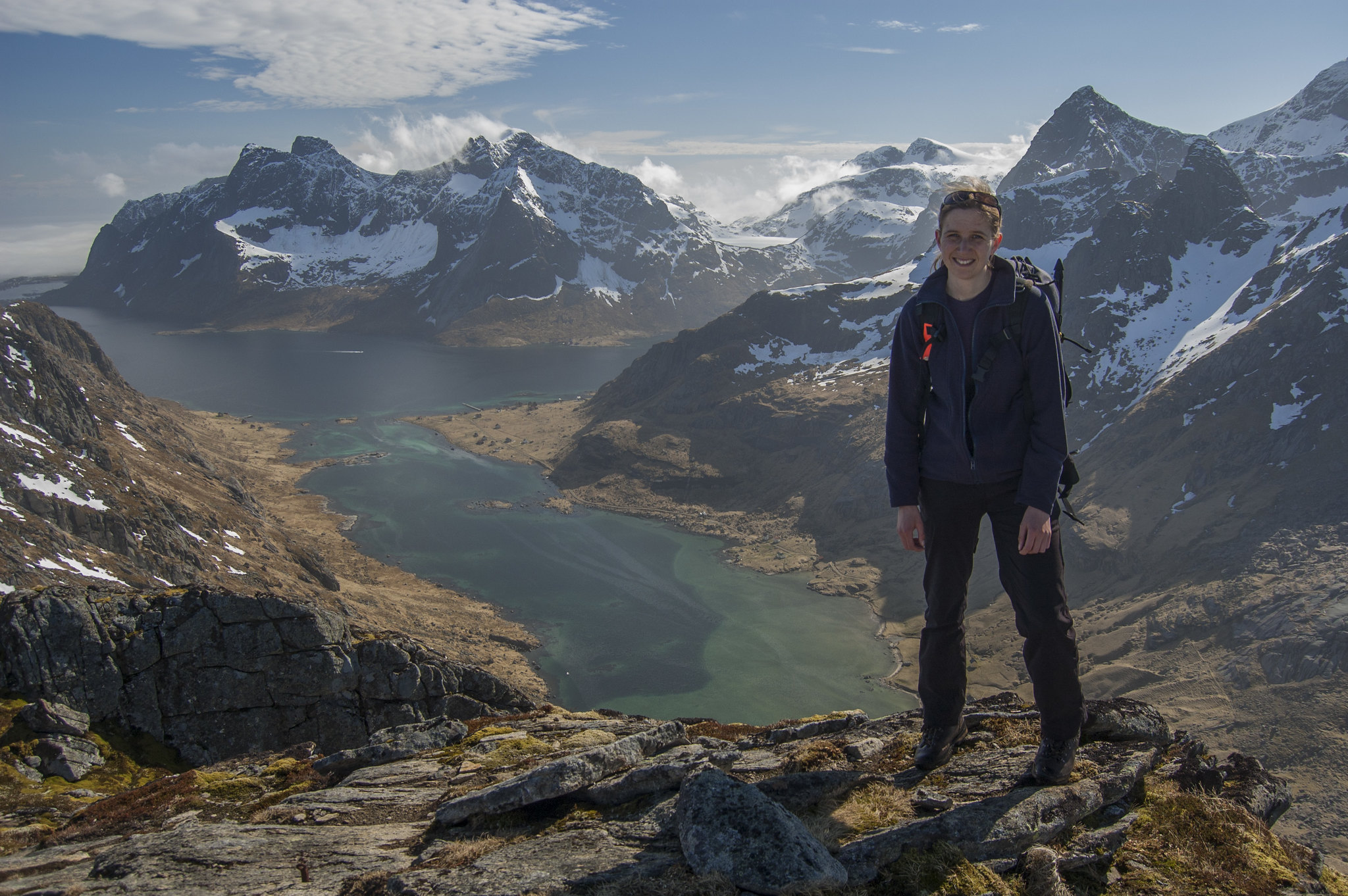 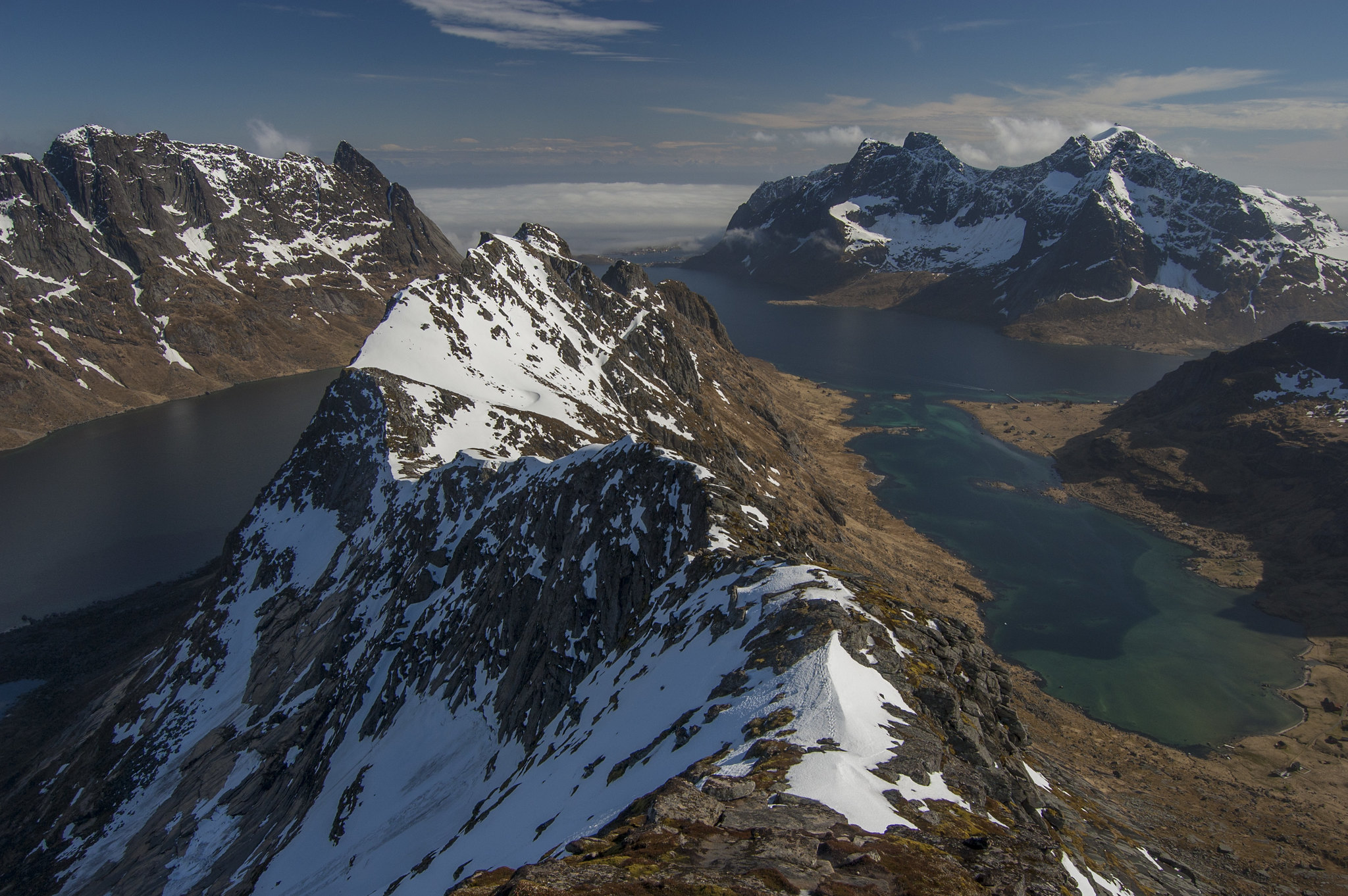 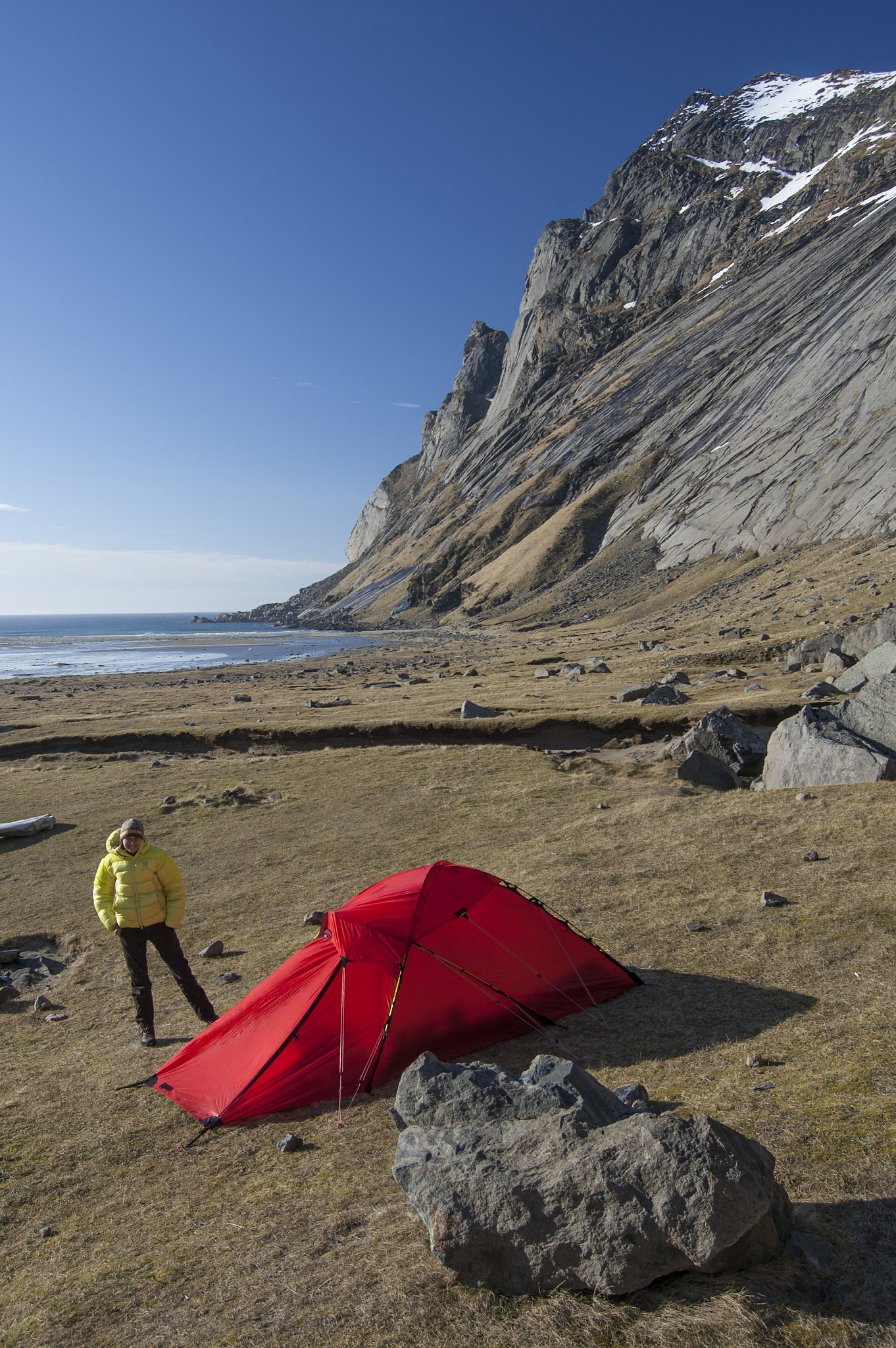 The following morning, we caught the ferry back to Reine and walked through Moskenes to Sørvågen, before finding a spot to pitch our tent, with a view to attempting Hermannsdalstinden the following day. (N.B. Camping is not permitted around Stuvdalsvatnet as it's a drinking water supply). Hermannsdalstinden is the highest peak in the western Lofoten islands and, in all honesty, we weren't at all optimistic about our chances of reaching the summit; reading route descriptions and looking at the map revealed a steep final slope to the summit that, under the current snow conditions, we were sure would be an avalanche death trap. The weather had deteriorated over night and rain had set in the following morning, and after following the route as far as the Munkebu hut in conditions rather akin to Scottish winter, our suspicions were confirmed.

That was our second-to-last day on the islands, and for our final night we returned to the campsite in Moskenes to be battered by the wind and pummelled by the rain. The weather didn't let up the following day, making for a ferry crossing with all the stomach-churningness of a three-hour roller-coaster ride.

I consider myself very fortunate to have been able to travel to many wonderful places and see many amazing things in my life so far, and hence I'm all too aware that these blog posts suffer from an overdose of adjectives such as "stunning", "beautiful" and "breathtaking". I apply these descriptions liberally but without exaggeration, which leaves me in a pondry as how to describe the Lofoten Islands. Without a shadow of a doubt they are stunning, beautiful and breathtaking, but they are more than that as well. A cliché it may be, but "words don't do them justice" is a very apt description, and so I'll leave it at that, save to say that our ten days on the islands was one of the most amazing experiences of my life and one that will stay with me for a very long time. We'll be back, for certain!

A few websites you might find useful in planning a trip to Lofoten:

Public transport in Norway tends to be more punctual and reliable than its British counterparts. The exception, of course, was when we were rushing back to Rygee to catch our flight!

Lofoten on a budget

Norway is an expensive place, but shrewd spending and a good deal of thrift can be employed to limit the damage. This is how we kept the costs down:

One of the few campsites open on the islands at this time of year is the campsite in Moskenes, a few hundred metres away from the ferry port. At 150 NOK per night for both of us (small tent, no car, no electricity), it is great value for money compared to other accommodation options. As well as the usual toilets and showers, there is also a laundry room and a little camping kitchen that has an electric hob and microwave (no fridge or oven), with a few pots and pans but no utensils (best to bring your own). I imagine this gets crowded during the summer, but it was quite when we were there.

The toilets and showers were clean enough, though definitely not spotless. The showers cost a minimum of 10 NOK and to my dismay, I discovered that 10 NOK only lasted 2-3 minutes - barely enough time to wash the shampoo off my hair! The campsite is in an exposed situation, and despite large boulders in place to lessen the impact of the wind, you'll want to be in a sturdy mountain tent if the weather's bad. 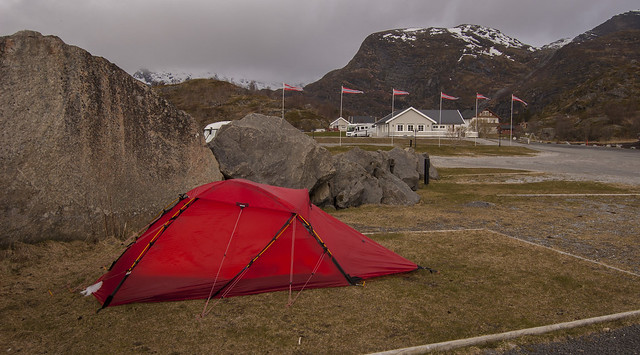 Subscribe to me and get notified when I blog